There Was a Car on the Grass

Sam: Mommy, are we going to drive on the grass?

Mommy: No. We don't drive on the grass.

S: Lawnmowers drive on the grass.

S: Firetrucks drive on the grass.

S: Uncle Rick drives on the grass with two wheels.

I Don't Care if It's a One Seater 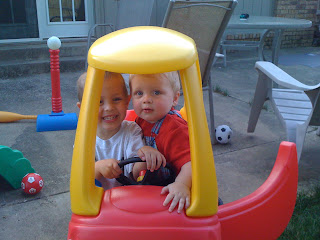 After this picture, Sam decided to climb out the window. Cooper decided to also, only the car toppled over with him. Thankfully no one got hurt.

Cooper has the funniest personality! That boy does not care who you are or how old you are you better not mess with him. And if you don't want to share then you better just be ready to run :o).

But he also carries his blanket around the house and sometimes even takes it out to dinner, to the store or school.
Posted by Christy at 8:48 PM No comments: 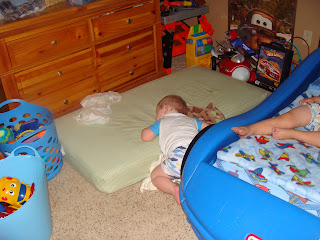 In an effort to maintain my reputation of "impulse shopper", we bought the boys bunk beds over the weekend. We got a really good deal on the bunk beds themselves, but may have been suckered into over priced colorful mattresses. But enough about that....

We are also redoing the colors of the room, which Dave began last night. Which met that Cooper couldn't sleep in his crib. We took the mattress out and put him and Sam in the toy room. The picture above is how I found Cooper when I went to check on him. Hope he stays on his big boy bed!
Posted by Christy at 5:55 PM No comments:

Give Credit When Credit Deserved

Today Cooper came into the kitchen to throw a wrapper away. I said "good job Cooper", and Sam responded from the other room:
"I told him to do that Mommy".
Posted by Christy at 2:50 PM No comments:

After yesterday's ordeal at Urgent Care which consisted of 3 attempts to give and IV and one shot he had 4 bandaids.

When Cooper got home he would come to me as he discovered them and say "boo boo" and have me take them off.

So that is the new word boo boo.
Posted by Christy at 2:49 PM No comments:

Brotherly Love at It's Finest

Let me start this story with Saturday afternoon. I took both boys up to a bounce place to meet a friend and her son Caleb. This place had jupiter jumps galore and across the street was a McDonald's. Sam saw that right off and told his friend Caleb he wanted to go there after they jumped. Sam and Caleb had a blast and Cooper just wondered around the place checking it out. But wasn't quite himself. When I picked him up toward the end he was burning up! I thought wow that is some major teething we got going on. We headed to McD's and each boy got a happy meal. I don't think any of the boys ate; Sam and Caleb because they were too interested in other things and Cooper because he looked like a pathetic little sick boy :o(. We left.

Fast forward to Sunday morning. Cooper woke up with a fever despite the Motrin we were giving him around the clock. Then he refused to eat blueberry muffins. We got him to drink a capri-sun but he threw it up (along with some milk that must have been in his tummy). YUCK. I decided with his high fever and that he couldn't keep juice down we needed to go to Urgent Care. They opened at 9:30, we got there at 9:35 and it was PACKED! It took Cooper throwing up in the waiting room at around 11:00 to finally get called back. They had no rooms available so we were put in a room with a nice cozy recliner, a VCR (yes they still make those) and a lot of books. I know, I know what does any of this have to do with brotherly love?? Well, when the nurse came back to take Cooper's vitals she said they needed to go weigh him. Sam and I stayed while Dave took Cooper. Cooper did not like getting weighed (I don't either) and was screaming. Sam promptly got up and said I will go make sure he is okay!!! I stopped him. Then the doctor came in and had to listen to Cooper and made Cooper upset and then asked for symptoms. We gave them. Apparently left one out, because Same said "Mommy don't forget to tell her he wouldn't McDonald's". The doctor said she wasn't sure what was wrong but they needed to do a chest xray, an IV, flu test, strep test and some lab work. Cooper was balling and Sam had a look of concern while we waited outside the room while he got the flu and strep test. I decided it would be best to take Sam home for a bit. Sam wouldn't talk the drive home and then wouldn't eat when we got him. He started crying and I asked what was wrong and he said "my Cooper". I said well let's get some clothes for him and go back. Sam then proceeded to get Cooper's favorite books, a toy saw (he said Cooper needed it) and one of his favorite b's (blankies) since Cooper threw up on his own. . Dave said it was going to be awhile so I called Sam's Elizabeth to come watch him and while we were waiting we brought brother his stuff. They still hadn't go the IV in Cooper when we got there and couldn't draw any blood either. Poor guy probably felt like a pin cushion. We dropped the stuff off and I took Sam home. When I got back Cooper was laying with his Daddy holding on to that saw for dear life. Sam must have known that the saw was the best thing.
We got home and Sam was so happy to see his brother, who thankfully did not have to get the IV because they couldn't find a vein. Instead he got some anti nausea medicine and Tylenol which brought the fever down and helped him drink something without throwing up. Later that night Sam started running a fever too and I said he needed to drink juice. Cooper promptly got up and brought Sam his capri-sun he was having earlier. 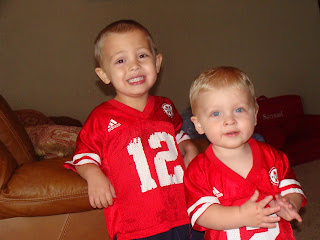 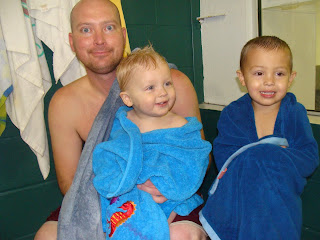 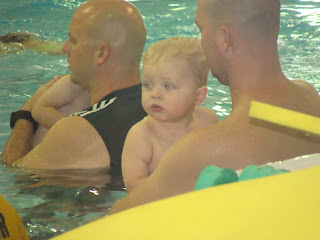 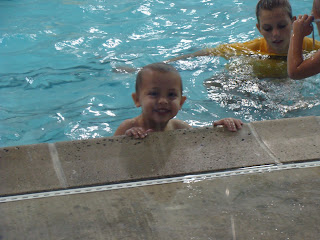 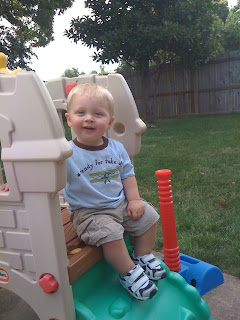 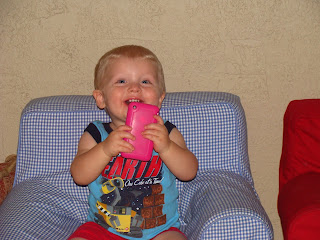 He's not my baby anymore.
Posted by Christy at 8:55 PM No comments:

We Actually Did Something... 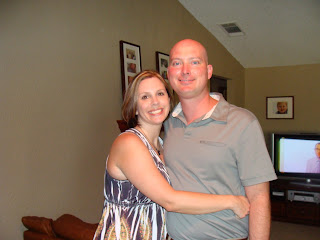 And the "we" didn't include Sam and Cooper. A good date night is always good! We got to eat at the bar, because we had no one under 21 with us (and Dave didn't make reservations). We got to stop at the ATM to get cash, and both got out of the car. We didn't have to strap two kids in their car seats each time we got in the car. And best of all, we were reminded that we are not only Mommy and Daddy, but Husband and Wife.
Posted by Christy at 8:52 PM No comments: 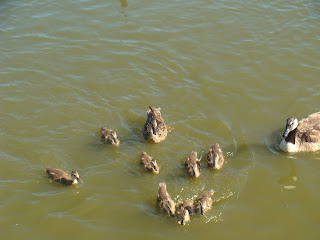 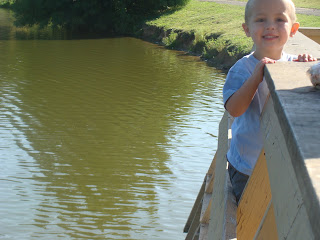 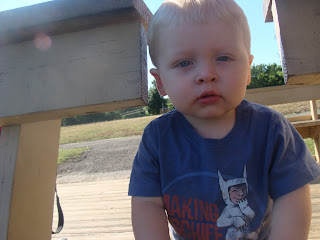 Okay, so there weren't any geese...oh well.
Posted by Christy at 8:50 PM No comments: 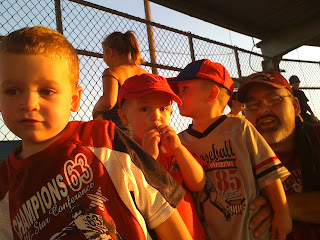 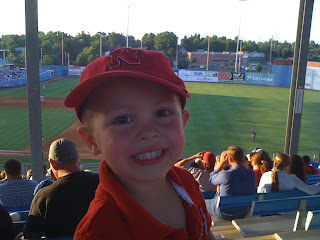 It wasn't the batter's hoping they didn't get strikes..It was Sam and his buddies. I think they made it through 3 innings and saw zero plays. Bleachers are soooo fun! Glad Mommy and Cooper opt'd for a trip to the mall that night!
Posted by Christy at 8:46 PM No comments:

Posted by Christy at 8:57 PM No comments: