Today you are TWO! 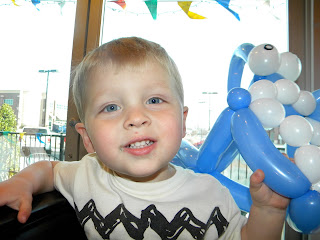 Here you were ONE! 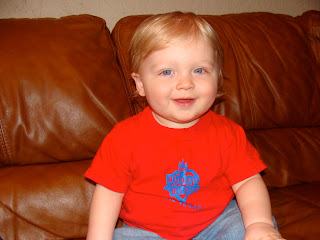 And two years ago you entered the world!! Couldn't imagine it without you! 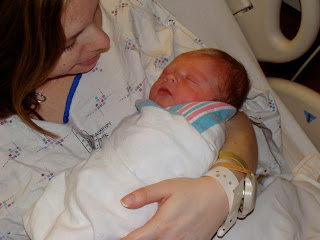 Today soccer consisted of running and letting the ball roll right by. When I asked why he doesn't kick it he said "they don't kick it to me." Silly - you are suppose to kick it away from them. He also enjoys making his friends laugh out there too. I even saw some hugs during the game.

The Grandparents are coming next weekend, I think they are going to enjoy watching one of Sam's games!
Posted by Christy at 4:22 PM No comments: 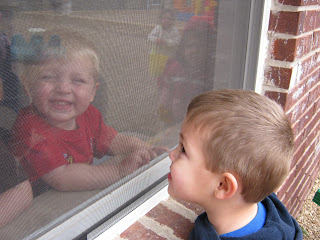 I love how close Sam and Cooper are. This is a picture of them at school, Sam always goes to the window when he is outside to say hi. Saying goodbye is never easy though. Today when I picked them up both of their classes were playing outside and they were playing together. I hope they love each other like this forever!! Sniff sniff...
Posted by Christy at 9:21 PM No comments: 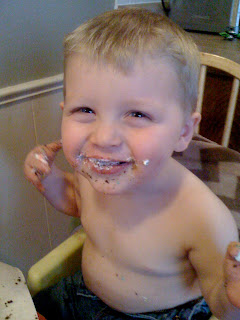 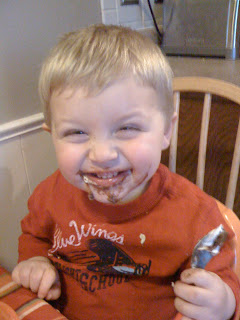 Posted by Christy at 9:33 PM No comments: 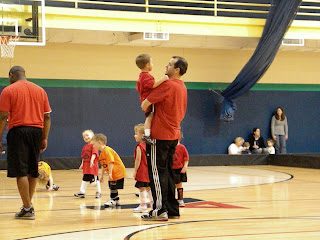 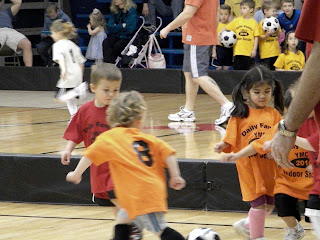 Posted by Christy at 9:31 PM No comments:

Who Couldn't Be Happy With These Kids?? 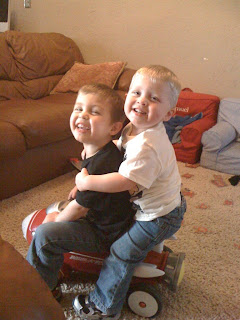 Posted by Christy at 9:30 PM No comments: 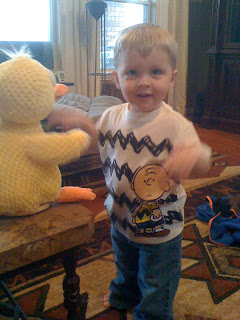 What's going on in the Williams' household. Well, let's see. Cooper will be two in..wait for it...18 days. He is so smart for his age - and I am totally not saying that because I am his Mom. He can count to ten in English and Spanish. He knows his primary colors - red, green, blue and yellow. He also talks in full sentences, sometimes you may not understand him, but I hear the pauses that make the words he is saying sentences.

Cooper loves to do everything himself. In fact, tonight we went to Target (it was some Cooper and Mommy time - I will let you know where Sam was in a minute) and Cooper wanted to put the cookies on the thingy that you put your groceries on before checkout. Well, I tried to help him and he yelled. He got them up there and I moved them and he yelled. I gave them back and he put them back. We were okay after that but the guy behind me had a smirk on his face. The same guy whispered something to his wife as I tried to convince Cooper to put on his jacket because it was raining and Cooper WOULD NOT put it on. He didn't wear it. No idea what the guy could have been saying. I am sorry, sometimes it is easier to pick my battles. We parked close.

So anyway, yes, he likes to do everything himself. Cooper is a little rough, I always want to tell him to be a lover not a biter. For awhile there we had bite reports almost everyday! I was like I so have that kid. He's getting better and is really a sweet boy. He still has his blonde hair and blue eyes and I promise that makes up for anything else. I love when he runs up and gives me kisses and says "I love you Mommy, drive safe" every morning before he goes to school. Speaking of school, he is in the two year old room and doing great.

Sam started soccer and is learning to listen to his coach, kick the ball and play on a team. He seems to enjoy it. Tonight was extra special because he just went with Daddy and they had an ice cream cone after.

Sam is a very simple and complex kid (yes I used both of those words to describe him). He likes things in order and scheduled. If we go off of his schedule - we have issues. Change is not his friend. But we are working on that and I think he is getting better. The thing about Sam is just have to be upfront with him. He wants to know why, when, where and how for EVERYTHING. But if you tell him something like at soccer you listen to your coach, run and kick the ball. He repeats it and says okay. And when he gets there that is basically what he does.

So yeah, he doesn't quite get it. But what that means to me - he is quick with a comeback. That will come in handy one day.

Sam will be 4 in July - can NOT believe that. He is ready to "be bigger". I am not ready for that. I make sure to ask him if he will always love me as much as he does and he always says "yes."

Dave and I have been working like crazy! We are trying to get in shape and eat better. BORING. But that may explain why I am never on here. We are also getting ready to start some home improvement projects. Busy Busy!!!

So there is my update. If I would come on here more often I would probably have so much more to say. I am going to make a point to try and update at least once a month.
Posted by Christy at 9:06 PM No comments: